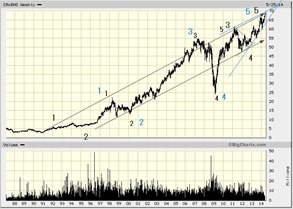 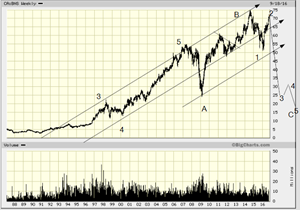 Precisely two years ago when the stock was trading at about $70, our expectation was that it would trade to the other side of the channel in which it had been for most of our (working) lives. That blog is still available for you to see. The rational for this expectation, at least in EW terms, was that we had, or were about to complete a very large and irregular B wave. In reality the stock traded from a slightly higher level of about $75 down to $50, a drop of 30%! It failed to reach the other side by only a few dollars, but it did overlap with the all-time orthodox high of $55 set in 2007, potentially a very bad sign.

The B wave is on the border of what might be considered acceptable for the size of a B wave, i.e. 30% higher than the previous top. This leaves open the possibility that it wasn’t a B wave at all. Instead it could have been a 5th wave. Either way the next big move should take the stock down to about $25, alternatively the low of wave A, or the low of the 4th wave of previous degree. Depending on that the wave C down in the former case should start its third wave down any moment having finished wave 2, or, in the latter case it has just completed a wave b to be followed by a 5-wave (smaller) wave c.

For comparison purposes we show HCG and CWB below. These are small Canadian banks and consequently perhaps a bit more volatile. We expected HCG to go a little lower before closing the gap. It did not but the it did close the gap. But now we are close to the lows for both of these banks supporting the notion that lower levels for all banks may be in the cards, 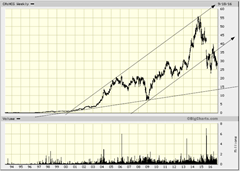 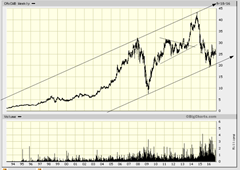