This stock only came into existence in 2007, so there was not much of a history or, for that matter, much of an EW pattern to work with. Fortunately sometimes all you need is one minor pattern to be able to anticipate the very next move even though everything beyond that remains inscrutable. In this case there is a triangle, or perhaps even two, as shown in pink (the larger one) and blue the smaller one). Both measure $3.75 at the mouth and as the low of the e wave is the same for both, they both suggest a high of $5.50. Furthermore, if this is indeed a triangle it would have to be a B-wave and not a 4th wave given the proportions. In other words one could reasonable expect a large A-B-C structure as shown in green. This is corrective and calls for a drop back to $1.75 or lower. More often than not the C legs tend towards simple or vector equality, again suggesting $5.50 for a top.

As far as timing is concerned, the extreme is frequently reached more or less perpendicularly above the apex.  This would be dead on for the blue triangle but not for the pink one which could allow for a peak much later. So where do we go from here? 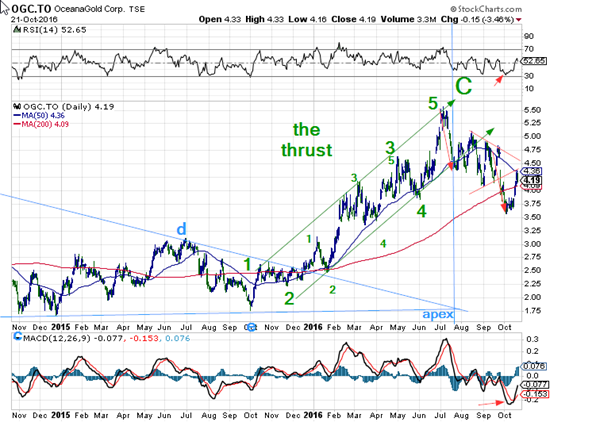 The “thrust” can easily be counted as a 5 wave move so that part is OK. The almost 40% drop from the extreme is now beginning to look very much like a correction, an a-b-c again but on a much smaller scale. That could mean that the high is not yet in and is still to come, albeit perhaps close to the $5.50 level but a little above it. Only after that will the stock drop back to $1.75 or lower.

Given the contradicting message from the longer and shorter term pictures, it might be advisable not to take additional positions as it is entirely possible, despite the very prescient call last May, that the whole idea of triangles is completely wrong and that we are presently only just starting wave 5 of 3 of 3 of a larger bull move which would have the potential to go much higher. I do not think so, but EW and thinking do not mix.