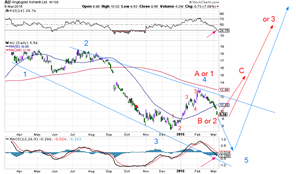 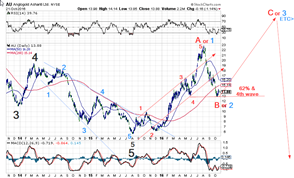 Be careful when reading these two charts. The scales are not the same! On the left we show the two possibilities. In blue we need one more low to complete a diagonal 5th wave of 5, and, in red, we have already seen the low and are on our way up. As it quickly turned out, the drop was not yet complete and the stock followed the blue lines, rather precisely!  It climbs back up rapidly to $23, well above the top of the diagonal at $19. This stock comes from a peak of about $60 and has taken the past 10 years or so to come down (see March, 2015 blog). It is therefore highly unlikely that this one year rise would be the entire correction and one should assume that at worst, this is only the A wave of an A-B-C. That implies that another wave up is coming once the B is done, which it probable is as it retraced a perfect 62%. Equality between the upcoming C and A from this point would suggest $29. Using Fibo ratios $33 might be achievable.

The only conceivable error in this EW analysis is that the low has not yet been established and that the move from $6 to $23 is. in fact, a complete correction – incidentally it can be subdivided in two equal parts of about $10 each – but of a lesser degree than thought. This is highly improbable as it contradicts the big picture as per the XAU etc.