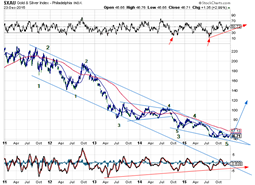 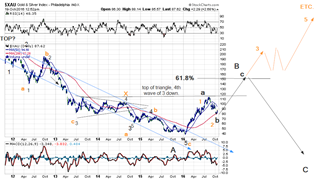 Once again we are amazed at how accurate our EW calls often are! Back then it was relatively easy as there was a very clear wedge in stocks like ABX, which after a triangle truly anchors the count perfectly. No such luck this time as the different stocks show different paths to where we are now. Some have clearly completed a correction recently, implying an upmove directly ahead. AEM, FVI, PAA, AU and, perhaps, DGC are good examples. Others such as ABX itself is not.

Roughly speaking we are not sure if the correction of the 5-waves? down from the peak at the start of this year is over or if this is just half of it, or if we are in a real new bull.  All we can say at this juncture is that both interpretations call for higher levels immediately ahead. Furthermore there is an event that could trigger a flight to safety (at least according to some) into gold stocks, which is tonight‘s3d debate. If you are not already thoroughly sick of this sordid spectacle you probable will be soon! Also it is not true that what happens in Las Vegas stays in Las Vegas. This time will definitely be different.