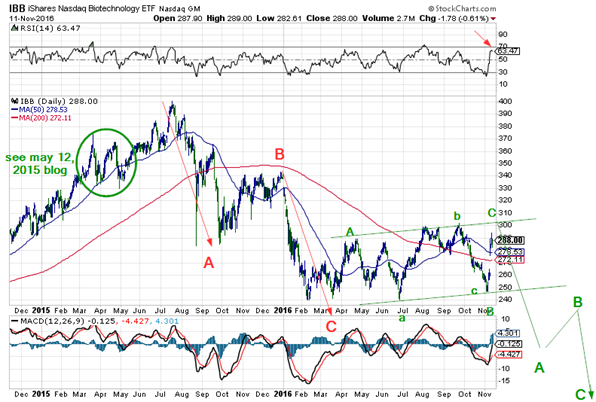 We love blowing our own horn, nobody else does at least not often. Here is the text from that May 12, 2015 blog ;

What we have here is a “flat” a-b-c correction that fits in a box that, in this case, has a slight downward skew. This is a particularly well formed example and consequently it is a credible predictor of the next move, which should be up to at least a new high.

Looking at the bigchart (see previous blog) a reasonable guesstimate of where the ultimate top should come in, is around $400 or so. We know that there aren’t any bubbles, we have that on good authority. But what we also know is that bubbles occur invariable far away from home, that is in areas that we know very little or nothing about. Gullibility increases with ignorance, which we all know is itself bliss. We would not wait all the way to $400.

This was dead on, except maybe for the advice not to wait for $400. Lately every stock seems to have to go to the furthest extreme. Unfortunately , given the number of stocks, ETF’s and situations that we try to follow it is not feasible to always follow through. The size of my staff simple does not allow it, so you, the reader, have to think along! Here you would at least be out or maybe you would even have gone short and saved yourself from a 40% loss or made a gain of a similar amount.

The latest C wave of a correction, the Trump effect according to some, was meteoric and approaching completion. After that we expect a second A-B-C down to take us, at least, to the 4th wave of previous degree which is around $200 or slightly above. Much lower levels are a distinct possibility. Equality between the two A-B-C’s and a 62% overall correction is at about 140 or so.

The Trump argument for tech stocks is that these have been powered by foreign brain power. His immigration policies would reduce the availability of such brain power and ergo tech companies would suffer. So why did this ETF shoot up?, are biotech companies not even more dependent on foreign brains? Or is it that scarcity raises all prices, like the tide.