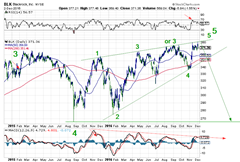 When this stock approached $400 more than a year ago, we thought it was done. Recently it has gone a little higher ($380 or so) so that was a wrong call. But today we have a very nice diagonal or wedge. Invariable these are 5th waves that end a sequence of some degree. A drop from about here of about $100 is to be expected if this interpretation is correct.

Blackrock is big! It has more assets, 3x as many, as the the Federal Reserve and equity to match. It is run by Larry Fink, one of the original bond traders from First Boston who has successfully transformed his career from a “big-swinging-dick”, to use bond trader parlance, to an , not all that old, eminence grise.  He has been a behind-the-scene power broker in just about every deal that took place in the last twenty years, including the bail-out. Now Trump has selected him as one of many members of his advisory council, together with Stephen Schwarzman as chair (CEO of Blackstone, the incubator of Blackrock).

By conflating economic and political interest Trumps presidency becomes more dependent on the economic wellbeing of US industry and  Wall street. If BLK is a guide to what the future might hold things do not look that hot.