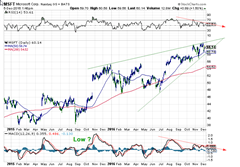 We have been wrong on Microsoft in 2012, 2013 and 2014. But at least we were consistently wrong which is why we are revisiting our view instead of updating it, just in case you wondered.

EW can be hard to apply properly and if you aspire to perfection – a task almost by definition impossible – you are bound to be disappointed from time to time, sometimes most of the time. But EW is like doing a puzzle of, for instance, a blue sky over a blue sea. In the beginning you don’t see it and then all of a sudden the picture becomes clear, that is the pieces fall together quite nicely.

Microsoft is a sell here if you are a prudent, thinking investor. Here are some good reasons;

1. We are, or have double topped. This is not an EW criterion but it tends to work often. Once you climbed the mountain you become disoriented and aimless, which is why most car accidents happen a very short distance from home  – 52% within 5 miles. Once the goal is met, what is next?

2. Markets just love symmetry, and even though this could go on for another year, the move down to the 2008 low from the 2000 high, and then the move back up to the recent highs are almost vector equal. This is the signature of a very large “flat” A-B-C with the C still to follow.

3. The short term chart is displaying a set of lower highs and higher lows in the shape of a wedge. Perhaps it is a “diagonal” which essentially calls for a drop back to the level of the base, as a minimum, that is about $38.

4. Unrelated to EW, but nevertheless important are the readings of the RSI and MACD. Both are screaming that an accident is just around the corner.

5. The high of this stock was at $61.41 This is within spitting distance from the Fibo number of 61.8 or  the ratio of the parts in the Golden Section, a cornerstone of aesthetics.

6. Fundamentally, which has nothing to do with EW but definitely can have important predictive value, we are most certainly in the post-PC era. Smartphones, tablets and so on have overtaken the personal computer. Soon the average person will no longer be able to read or write and will not need Windows to tweet! Elementary math skills are already a thing of the past. Furthermore Bill and Melinda Gates have already received the Presidential Medal of Freedom (ironically for spending a fortune on the controversial Common Core initiative) and really do not need a higher stock price.

7. Intel (INTL), that other great computer stock whose products are also in every computer, is barely trading at 1/2 of its peak value despite having a higher dividend and a P/E that is less than half. Its chart also suggests a sell.