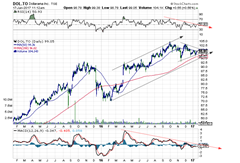 This one we got wrong. At about $85, after coming down from around $93, it looked to be a sell. Clearly it wasn’t.

This is a family business started in 1910 or so that went public in 2009 after a period during which Bain & Co. held a stake in it. The MO is relatively simple, buy low and sell high. This is relatively easy to execute if you confine yourself to things like paperclips and balloons. You buy for 50 cents and sell for a dollar and given the relative small size the purchaser is rather price insensitive. Gross margins run at about 40%. Provided there is a low level of  saturation, about 2/3 of that in the US, and product can continue to be sourced cheaply, read China, you can continue to expand for quite some time. But perhaps we are getting there given the large number of stores in Ontario, the deteriorating exchange rate CAD/Yuan and the rising minimum wage. This is like a Walmart,  particularly as they keep introducing new “pricepoints”, now up to $4 rather than the original $1. But we go by EW, not fundamentals.

EW wise we can, again, distinguish five waves up forming a sequence. Wave 5 is approximately of the same size as wave 1. Wave 5 hit the upper trendline already, but could do so in the near future in a “thrust” from a possible triangle. Both the RSI and MACD are rather anemic . And we hit the Mnt. Everest $100 mark. A sell.