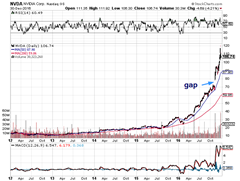 Nvidia caught our eye the other day as it was about to become the best performing stock in 2016. Its Q4 earnings were good (up by about 50%), so the stock “shoots up” as the investing community is amazed and surprised. The chart on the left is semi-log and the one on the right arithmetic. They do visual stuff, whatever that means.

We see a triangle in the semi-log chart and an almost vertical rise in the normal chart, leaving behind a gap at around $ 70 or so. Triangles lead to a thrust which is then fully retraced and gaps that want to be closed. That gives a target between about $10 and $70. Either way sticking around for a few extra bucks is not worth it!

Note; There is a slight overlap between the top of wave 1 and the end of the triangle wave 4, that is, strictly speaking a no no. But even so there is an eight year congestion period and this would result in performance similar to a triangle.