This is a chart of Hasbro minus Mattel. The idea behind this is not entirely mine (it is from Investopedia Chart Adv.), but the presentation is. Both Hasbro and Mattel make toys and Hasbro was able to get a deal from Disney with respect to the “Frozen” movie. As a result they did much better than their rival Mattel. This is made visible by displaying the difference between the respective stock prices in a single chart, as per the above. HAS over this period is up from about $30 to almost $100 whereas MAT, despite fairly large swings, is about even for this same 5 year period.

The question now is if this will continue, will stop abruptly, or will reverse. Probable all three in that order. From an EW perspective there may be a triangle from July 2015 to about Nov. 2016. If so we are in wave 3 of a thrust out of the triangle that measures roughly $25 for a target of about $75 or just slightly higher. There is a big gap that will probable be closed soon. The RSI and MACD, to the extent that they are applicable to this spread, are both at extremes.

For believers in the “buy low, sell high” philosophy this is a great opportunity for a pairs trade selling HAS short against buying 3xMAT for a sector neutral overall position. As always talk to your broker.

Below we have added a somewhat longer term view; 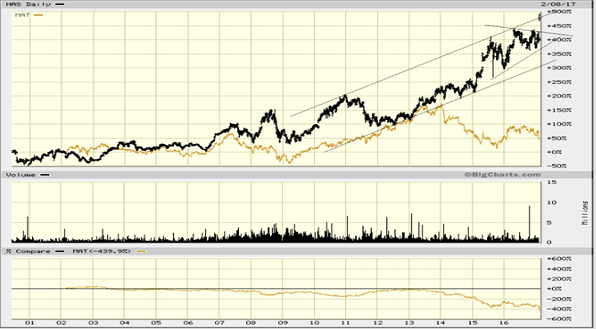