Zenbanx Holdings, a Deleware incorporated company was apparently sold earlier this month to SoFi, Social Finance Inc. This company’s shares are not listed at this time but they are planning to do so soon under the Jumpstart Our Business Startups Act which act essentially allows startups to ignore many regulations with regard to accredited investors and so on. Detractors of this Act have argued that it legalizes all the bad habits of the old-fashioned boiler room dealing operations. In the meantime they have been able to register debt securities with the Securities and Exchange Commission and have raised considerable amounts of money. With a relatively small portion of this money, roughly $100 mln. US, they are going to buy, using shares, ZBH.

ZBH owns 40% of ZBC. The majority interest, 60%, is held by Duca. ZBC was granted permission to exist on the 16th of July, 2014 by an order issued by DICO, the Deposit Insurance Corp. of Ontario which has part of the regulatory supervisory powers over credit unions. The terms of the order are;

Reading the above we have no idea if the present arrangement will be allowed to continue, assuming that is what the parties want, or not. By our estimates, see previous ZBC blogs, ZBC has lost roughly $20 mln. over its short life not including some direct expenses that were born by its majority parent. This is on the assumption that operations were drastically shrunk as of about April last year. Otherwise the damage could be considerable higher. Of course the ZBH shares held as an investment by the parent may have appreciated as a consequence of this deal and assuming the shares received can be sold in a timely fashion. Tax considerations will play a significant role when an exit strategy is contemplated and would normally favour the continuation of the business if possible.

As Sofi has not done an IPO yet, we will look at LC, Lending Club Corp. which did exactly that slightly more than 2 years ago. Here is the chart; 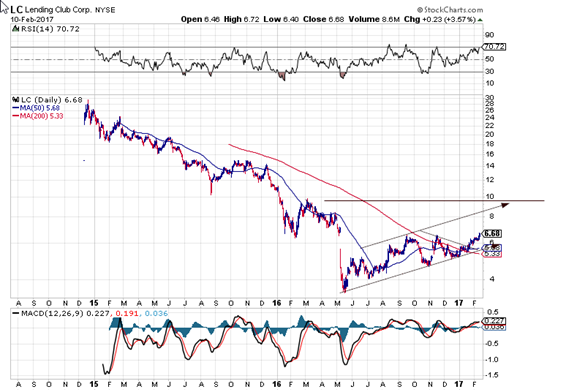 Founded by students at Stanford University the idea behind this company is based on what is called peer-to-peer funding. Each loan stands on its own and is broken into little pieces that can be bought separately. In its ideal and theoretical form , disintermediation can be taken to the point where LC ceases to be a principal and instead becomes an agent only. That is where it is at its most disruptive as it essentially democratizes the idea of a bank to the extreme where it is no longer required, sidestepping most regulatory bank rules. This is also where point 1 above becomes very muddy as it is not clear to whom the “ services” are provided and what they actually are.

Sofi is looking to follow in LC’s footsteps, the good ones that is. Already they are very self assured , brash, cutting edge and so on and even if they manage to avoid all the pitfalls that LC has gone through and regardless of whether they succeed or fail, it is hard to see how they would be a suitable partner in the long run. No doubt we will know more come April.