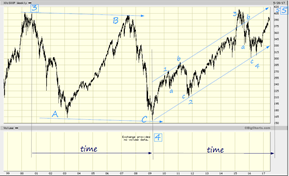 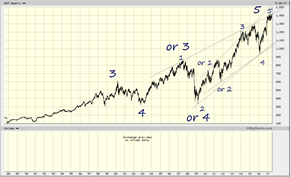 Here we have the Stoxx600 and the Russell 2000. Starting with the Stoxx 600 a case can be made that a near perfect flat was completed in early 2009, followed presumable by a simple 5-wave 5th wave that should make a new high to complete the sequence. All that is missing is a small 4 and 5. Time wise the drop in wave 4 and the rise in wave 5 are now almost equal.

Looking at the Russell 2000 the argument could be that a very large diagonal started much earlier in late 2002. The proportions sort of argue against this, so it is more likely that a simple 5-wave 5th wave started in this index also in early 2009. Alternatively an expanding diagonal could also be fitted in from this point. In both cases a small wave 4 seems complete and we are now in 5.

Regardless of what count applies, the conclusion that we are close to a peak seems to be inescapable. What is truly amazing is that both these broad indexes, one for Europe and one for the US are at these levels. Particularly the RUT 2000 seems to confirm the adage that “the sky is the limit”  which, by the way, also follows from the discounted cash-flow approach.