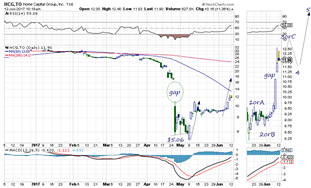 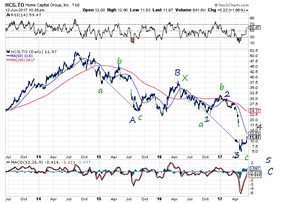 Home Capital did not quite make it to our potential target of about $4. Nevertheless we had made it perfectly clear that we did not expect a move much under $6. See previous blogs. So if you were smart and happened to buy some of this stock in anticipation of a rise to at least $8, you are doing well having already doubled your money.

From this point on we feel fairly confident that there is more room to the upside. A closing of the gap at about $16 is realistic regardless of what particular count applies. We would exit at that level even if much higher levels are still a possibility.

In our view the problem with this bank has been totally mis-characterized as a solvency problem. With real estate up 30% or so just in the last year that is ridiculous. It is a liquidity problem which, unlike a solvency problem can be totally resolved, at little cost, by injected the necessary funds. It would be an attractive take-over target for most financial institutions that are not part of the big five or six that might have a philosophical problem digesting such an addition. It might be a good fit for quasi banks such as Manulife Bank or even one of the large credit unions with an aim to completely demutualize one day.