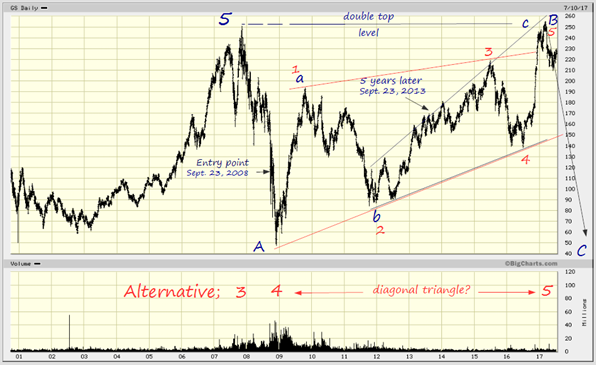 This chart is of Goldman Sachs. There are, in my opinion, two ways of interpreting this chart in EW terms. The real top was either in late 2007, which corresponds with numerous other financial institution’s tops, both in the US and elsewhere, followed by a lengthy B-wave that manages to double top for this stock but not most others. Or , alternatively, that top was just the end of a wave 3 and the great recession was wave 4 and the rest is a diagonal triangle wave 5. I do not give this much credibility.

The W. Buffett deal, entered into on the 23d of Sept. 2008 consisted of a purchase of 5 bln. worth of preferred shares AND the purchase of initially 2.5 bln. worth of warrants, that is 5-year options on stock with a strike of $115. This was immediately increased to 5 bln.  The whole purpose of the deal was to leverage on W. Buffett’s reputation as an astute investor and pull in other investors.

By pure coincidence, on Oct. 14, 2008, about 20 days later, both Henry Paulson, then Treasury Secretary of the US but previously top dog at GS, and President Bush, announced their versions of the TARP programme. Remember that one? The Troubled Asset Relief Programme. This bailout programme called for or sanctioned the purchase of equity options or warrants and the purchase of preferred shares (debt) mirroring the W. Buffett deal. In essence the GS deal put W. Buffett in a position where he could finesse the government to his advantage. The story is, of course, that this was very risky but the reality is that every second Central Banker etc. is an alumni of GS and that success was virtually baked into the cake.

The HCG deal is similar in all aspects except the timing. Whereas the GS deal was done too early, the HCG deal was done too late. Otherwise both rely on the almost assured cooperation of the respective authorities. These are always caught in the tension between “punishing” and “saving”, that is the regulatory side against the pragmatic side as in deposit insurance and not upsetting the apple cart.

Note that the immediate gains came in the very first year after the deal and then took a long time to repeat. I suspect that something similar may happen in the HCG case. In any event a doubling of your money is definitely not out of the question, even without a 10% dividend guarantee.

One significant difference is that the HCG chart is much clearer as the breakdown from the peak is a simple A-B-C correction, clear as a bell. The only question that might remain is whether or not the $5 low was indeed the low. See previous blogs. Also at this level it yields a little over 7% and trades at a p/e < 4. 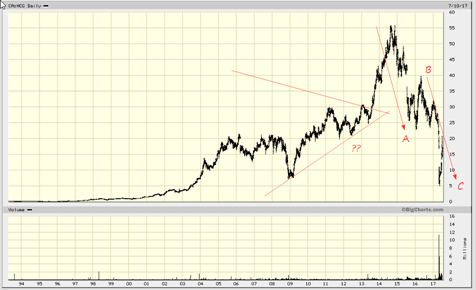