Boeing is actually the largest component of the ITA in our previous blog. The chart on the left is a year and a half old and despite getting it wrong we show it nevertheless as it illustrates what the right count might be. Whatever the case, we still feel that the 2009 low was somehow the end of a 4th wave. If correct the rest is a fifth wave which now, more clearly than before, is completing or, at the very least , very near to completion.

There is one little quirk with this company and that is their method of accounting, that is the “programme accounting method”. Essentially costs of manufacturing are allocated to production according to an estimated initial production run. Any costs above that, per unit, are simple capitalized to be spread out over future production. So far about $35 billion has been capitalized. To put that in perspective, that is about 5 to 10 years of profits. If the company fails to sell according to initial expectations there is a hefty price to pay further down the road. Beyond that the company is meeting its pension shortfall, one of the largest of any S&P companies, with its own shares, a dubious practice at best.

The stock is now going vertical. It is not clear how this is a Trump effect as the company was berated for charging way to much for the next set of Air Force One’s . Anyway it is all talk. EW wise this stock is a sell.

Below is an alternative count; 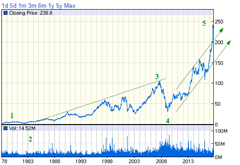