The usual then, July 11 of this year, and now charts; 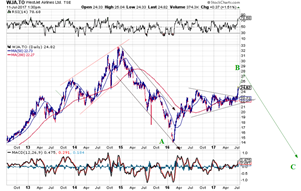 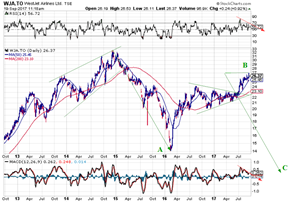 $27 was the target at that time and that was reached just a few days ago. It looks complete now. Not only is the structure of the rebound a clear a – triangle b – c, that is a corrective move, pretty clear but it also retraces a little more than 62% of the drop AND both the MACD and the RSI have turned down more than a month ago.

If the A-B-C scenario is correct, this stock could reach a level of $12 or so. Time to disembark ?

Air Canada, that was featured in the same blog, went three or four dollars higher than we anticipated which just proves that perfection is elusive.