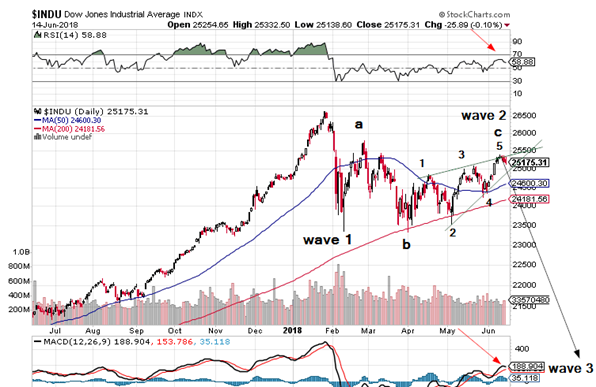 This has taken a long time. The immediate low was on Feb. 9, now more than 4 months ago. The Dow has remained within the range set in the aftermath of the initial drop. That is not the case for the Nasdaq and/or the Russell 2000 both of which have achieved new highs. This diversity and “slow-motion” action is typical of major tops if that is what we have here.

Nothing in the action of the Dow is perfectly clear. The initial drop looks like 5 waves but certainly can also be viewed as a completed a-b-c correction down. The b-wave shown can likewise be viewed as either a single diagonal or a three-wave structure. Much would depend on where one assumes the top of a to be, as shown or one step earlier. The diagonal c wave fails to make a new post wave one high as is but not if one assumes the latter interpretation. With the TSX within 100 points or so of its high and now displaying a relatively clear five waves up, there is good reason to suspect that this is it.