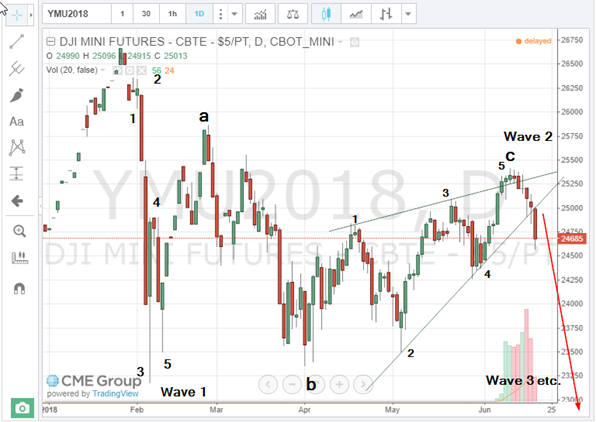 This is the same chart as in the previous blog using the futures. Nowadays they trade more or less around the clock and around the World. They are easier to manipulate as trading can get rather thin at certain hours of the day or night. Having said that , both charts present essentially the same picture and that is a picture of an initial wave 1 down followed by an a-b-c correction that corrects roughly 60-65% at the end. That the c wave is unable to exceed the high of the a wave does not bode well.

All the ingredients for a rough economic time ahead are present. Interest rates have been ridiculously  low for some twenty odd years which more or less dictates that they can only go up and this is indeed the stated policy by the Fed. and other central bankers. Employment at 3.8% can hardly go lower. Government spending in one form or another is virtually out of control everywhere while at the same time the discretionary portion of budgets is getting smaller and smaller. Military spending is going up in many parts of the World. Etc, Etc. In short we have never had it so good for so long, which , paradoxically, is the problem.