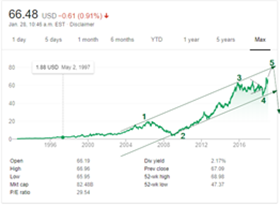 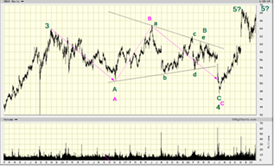 A friend recently sent me stuff on the markets from Harry Dent. He now thinks that the Dow will rise this year to 30000 or higher before dropping to 3800. As you may know this fellow has a different methodology and relies to a great extent on such factors as population growth (or shrinkage) and similar things. I have no idea what to make of it but being very gullible I do try to keep an open mind and search for things that may support his views (and negate the immediate bear view). Starbucks is such a stock.

Looking at the long-term chart of SBUX, it is possible to discern a fairly straightforward 5 wave sequence going all the way back to 1992 when it went public (at $17 but there have been stock splits). The only thing that is not clear is if the sequence is complete. Wave 4 in the Bigchart is without any doubt a 4th wave, an A, triangle? B and C structure where the waves A and C are equal, but despite already being about as large as wave 1, could nevertheless rise further to about $80 or more. Dent’s argument is basically that in the last year of a long-term uptrend the increases are normally rather explosive. If so such a scenario would be quite reasonable. We would now be in wave 4 of 5 or already in wave 5 of 5.

So one could short this stock with a stop at around $68, and do it again at, say $78 if that does not work right away. Or you can wait and only the the second trade or whatever iteration of it that you prefer. Put options may be an even better choice.