For some reason this stock shows up on Bigcharts as trading on Toronto. This is not the case. It trades on the Hanoi exchange. 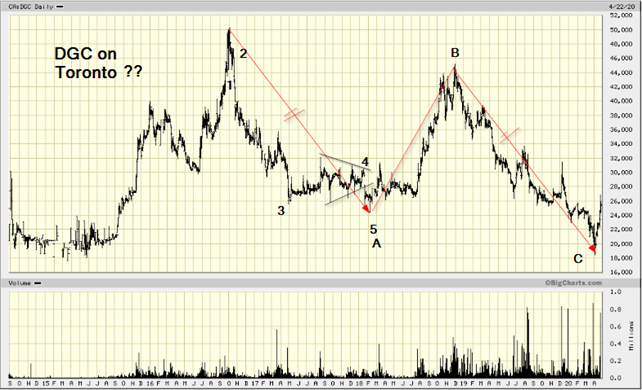 Despite Trump’s recent recommendations with regard to detergents etc. , this is not why we bring up this stock. Instead we do so simple because we are always amazed how geometrically precise markets can actually be. To the superficial onlooker the trading looks downright chaotic and messy but underneath there is something going on that “organizes” things with unbelievable accuracy.

This is an A-B-C in Elliott Wave terms, a correction in simple English. What is remarkable is that after having lasted more than three years, the wave C manages to end at a point that is exactly equidistant along both the x and y axis, that is as a vector.  There is nothing random about this and it is equally doubtful that EW is very popular in Vietnam.

The pattern, by the way, is a 5-3-5 completed correction implying that there is considerable upward potential for those that like trading on the Hanoi exchange. I don’t and was simple looking for Detour Gold (was sold and does not exist anymore as an independent entity).