We have not commented much on POT, other than to say that it is a rather high Beta-stock and very sensitive to China’s wellbeing. However, we did recommend selling AGU at about $72, after which it dropped to about $52. After that both stocks went off the radar screen and now that 3/4 of a year has gone by we have this bid for POT; so, if you happen to own it the question now is how high can it go? By the way AGU has not yet returned to the $72 price level! Here is the POT chart. (looks a lot like MFC !) 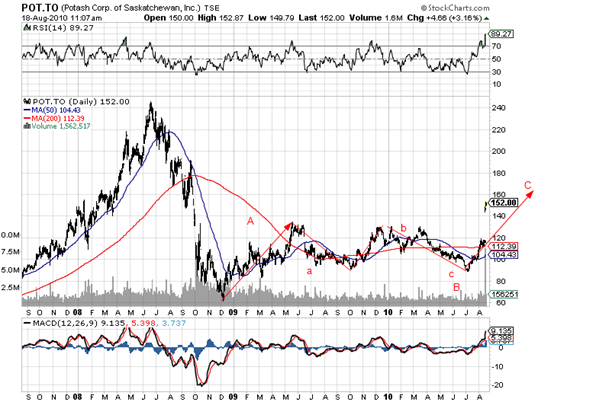 It is worth remembering that this stock was at $246 in 2008 and then dropped to $61, or about 74%. The subsequent rebound, after a swift move up, has been anemic for the last year and a half and it took the 40 billion offer to get prices  to $152 or $22 above the bid. So,using EW what is a logical value? $154 is a 50% and $175 a 62% retracement, chances are the stock will trade within that range, probable at the lower end where C=A. A 4th and 5th wave are still needed to complete the pattern (the gap having occurred in the 3d wave of C.

Theoretically, using a discount rate of 0% and assuming that Malthus was right after all, albeit off by a mere 210 years and invoking the famous ceteris paribus by assuming the mathematical impossibility that China will continue to grow at 10% forever, the stock is worth an infinite amount, which is what the market seems to be banking on. The rumor is that another suitor is lurking in the bush even though it is not readily apparent who that might be as there are few companies that have the clout to take so much hay on their fork (China itself , maybe??). Buy on rumor and sell on fact,  at $160 +