The “diagonal triangle” a.k.a. “pennant” or  rising flag, is a fairly common pattern that indicates an upcoming reversal as it invariable occurs in the 5th, or last, wave in a 5-wave sequence, or in a C of an A-B-C. At the very least the market should take the stock back to the base of the pattern and , in the event that it was a C in an A-B-C, usually a lot lower than that. EMC Corp. , a tech stock that was named, I suppose, after Einstein’s famous E=MC2 formula, is providing us with a text-book example of one of these patterns, right now! 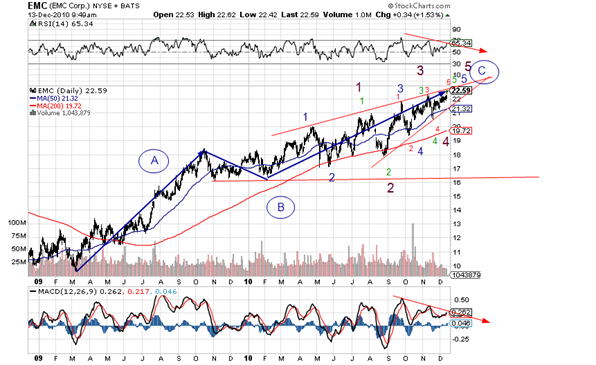 Nothing in this business is ever straight-forward as there are numerous valid ways of counting this wedge. In red is the smallest, green is a little bigger, blue bigger than that and then purple. Given all this ambiguity one might , justifiable ,  comment that perhaps there is one even large than all of these. However, since the apex is just a few months away, at the most, and the angle at which this pattern rises – about 50 cents a month – is so low that even in that event the stock is not likely to runaway from you by much more than a single dollar at the very most. Against that you are virtually assured of at least $5 to the downside making this, essentially a 5 to 1 proposition. By the way, both the MACD and the RSI are not confirming the recent highs! Also, looking at the big picture, we get;

From the big chart there is no specific target that is compelling , one way or another. But from the intermediate chart an argument could be made (in contrast to the above) that the stock completed , ( or is about to complete ) , a 5-wave move from the most recent lows of $8. The present level to about $23 would complete the pattern.

These wedge patterns are extremely reliable and work  as scripted most of the time. That , combined with a 5 to 1 reward ratio, makes this a very attractive trade!