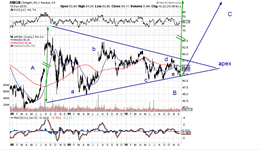 Big Pharma has been giving mixed signals. Amgen is a good example as it has , arguable, spent the last two years going absolutely nowhere with higher lows and lower highs, suggesting the possibility of a triangle. These only occur as waves 4 in a 5-wave sequence, or as waves B in an A-B-C. The short-term chart on the left seems to favor the notion that the triangle is a B wave and consequently an explosive thrust up should start any moment (perhaps today with the announcement of a new prostate cancer drug). The longer-term chart on the right leaves more possibilities, one of which suggest that this might in fact be a 4th wave of C in a multi year corrective move that is not yet complete. A breakout either way will clarify the situation.

By comparison I have added charts of PFE , BAX  and MRK.

Pfizer, see previous comments, overall favors the bull case having already lost 80% of its value. Today’s dividend announcement may push the stock through the upper trend-line.

BAX also favors the upside, that is at least to the level of the b-wave in the last A-B-C correction. MRK, see previous comments, is presently sitting in the middle of nowhere

In conclusion, a buy with a tight stop would be the way  to go on AMGN.