Now we know who did it, or at least what – a lack of a culture of safety – at BP, but also Transocean (RIG) and Halliburton (HAL). Not that difficult to prove. Makes one wonder why we cannot prove the same for the financial disaster that preceded it, after all many of the players are the same ones or in comparable positions, Dick Cheney & Bush, Rubin , Gramm both Phil and Wendy, Cox , Greenspan, Ayn Rand and so on, all contributed to relaxing regulations and or emphasized the market’s inherent ability to self correct itself. Tony Hayward was essentially sent, almost literally, to Siberia for making the rather honest statement that he would not mind getting his life back, Greenspan , on the other hand, who has never been honest about anything is still basking in the sunset years of his career as maestro.

Anyway the stock reached our target (we are already out) at the expected level of about $47. Sure it can go higher by why not leave good enough alone. See chart; 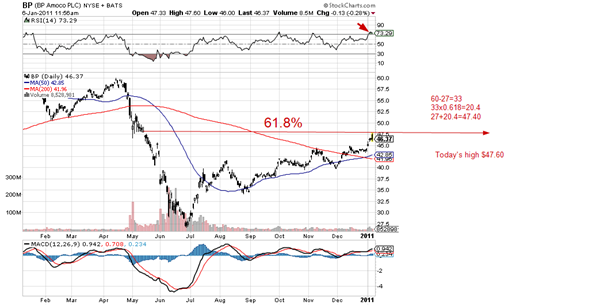 The chatter now is that Royal Dutch was thinking of taking it over but never moved into action. What the chattering classes of investment advisors seem not to know is that Royal Dutch, contrary to it’s name, is actually 60% Dutch and 40% English, being the merger in 1907 of Koninklijke Olie and Shell Transport and trading so a further takeover of British Petroleum would have made the whole thing even more British. (comparable to Unilever). However they balked at the unknown risks and passed. The question now is , if one of the largest companies in the world passed on the opportunity at <$30 why would anyone else get excited at >$47?