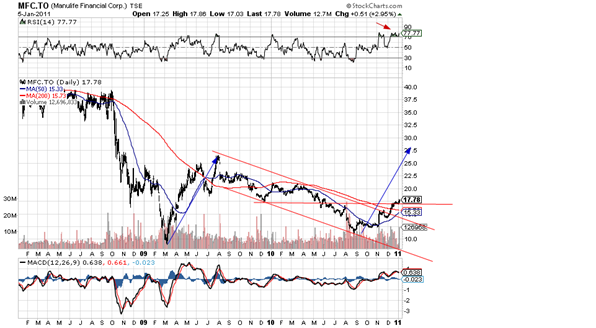 Manulife is one of my favorite stocks, not only did 3 of my predictions come true pretty accurately, I can also claim a slight advantage of having worked with these guys. This is not a small company, supposedly they are the largest insurer in North America and one of the few companies well positioned for business in such hotbed economies as China and India. In Canada they are best known for their meticulously manicured front lawn on Bloorstreet and their “performax” – one size fits all – life insurance product. As mentioned before, all this went to their head and they became so cock-sure of their own marketing nonsense that they made the cardinal mistake of actually believing it. Their biggest sin was that they applied the near certainty of mortality tables to the not at all certain economic statistics, particularly the one that says stocks never go down over 10-year periods. This delusion quickly moved the company from a boring and staid insures to a bell-weather of the stock market itself, albeit with a much larger amplitude in its volatility (why we recommended it at $11.25).

In our last few comments we recommended the stock as a buy for a $3-$5 minimum rally. It has done that and more. We would sell it today, it could go higher yet but that is where the probabilities change rapidly, furthermore a +- 40% profit is not a bad thing to take.  The company is mending its ways, now it has cut 25% of its exposure by shorting 5bln notional equity futures and a few other things. These “hedges”now cost a lot more than they would have 2/3 years ago! They hope to do more and be “hedged” up to 60% in a year or so. They are damned if they do and damned if they don’t. The costs are going to eat away at their profitability. For some odd reason the market just loves these guy after hating them 5 months ago. EW wise the stock could easily rise further to say $20 but , unless you use a tight trailing stop-loss this is not the time to stick around.