Due to overlap the count in green is simple impossible ( waves 4 and 2 overlap quite a bit) unless an entirely new bull market started in ‘93. So our guess is that either the purple or the blue count is correct. It does not matter one iota which one is the correct one (purple, probable) as in either case , and for that matter all three cases , it is unreasonable to expect a 20 or 30 odd year bull market to be corrected in a single year. Accordingly one would suspect that the move from the low of ‘09 is a B-wave! 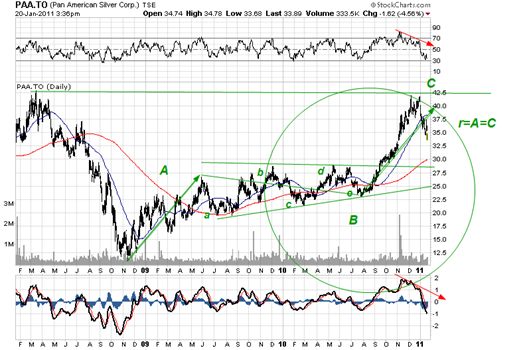 Clearly the up move has three parts to it, a pretty steep first part A, followed by a year and some rotating around $25 or so B, and then another spurt up in C. In this case the consolidation in the middle takes the form of a triangle, an extremely common occurrence! Once the triangle is complete (when you break above the upper trend-lineit is quite a simple task to pinpoint rather precisely where and when this B wave should go. Using the symmetry draw in a stylized C wave and using a circle with a radius equal to the A leg you find the point where there is vector equality. If ,furthermore , the point is at an interesting level, like 50%, 62%, or double-top then chances are you are on the right track.

By the way, had you sold at the end of the A-leg in the belief that at about 50% that was the B-wave, you would not have lost a dime as the triangle would have alerted you to the error and have given you ample opportunity to reenter.

Suppose all of the above is incorrect and we are in a 5th wave ( the green count), again not much would be lost as the trend-line for that runs only $3 higher, after which you would still make the same dive down!