Potash, and for that matter all the other fertilizer companies like MOS and AGU, all have B-waves, and in the case of Potash, an exceptionally clear one. Here is the chart once again. 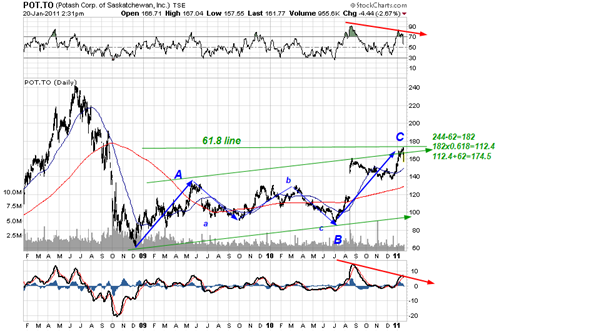 That this should be sold, at $160, was fairly clear some half year ago. The green “trapeze” ,if I remember my trigonometry, tells you precisely where the C wave travels the same (vertical) distance as the A wave. However C waves ALWAYS have to be 5-waves themselves which was not yet the case then. Furthermore a 50% or 61.8% had not been reached yet. So the better symmetry point was the next one (the stock was late but only a single dollar off the 61.8% target of $174 (the high was $173). Notice that the RSI and MACD turned a long time ago and the last few weeks the stock was propelled by upgrades, recommendations, Mosaids spin-off from Cargill and a whole slew of other noise.

By the way, if this is a B-wave, the stock will trade below $90 soon. Time will tell. A mistake that can easily be made, and I did on AGU, is that because the A wave within the B wave does not need to have 5 subdivisions as does the C wave, it is possible to be too early. The correction in Potash has already lasted 2 years so I do not think that applies now.