To get some idea where this market might be going, it may be worth looking at BRK, after all that is a company run by the undisputed, best value investor ever. Some grown men jump through hoops just to get their picture taken with the sage, hoping, perhaps, that somehow some of the wisdom will rub off on them. Here is the chart; 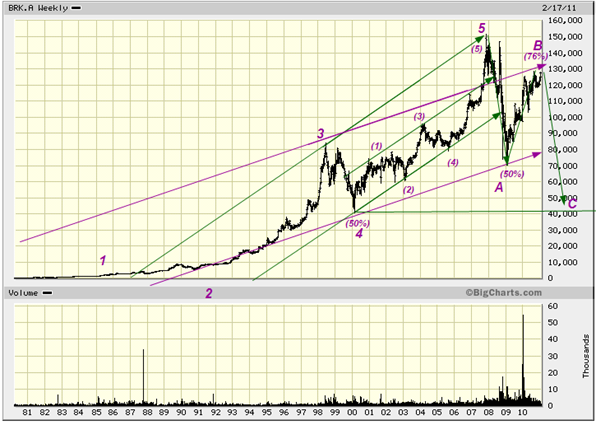 First of all it is clear that the Sage is just as bad as everyone else in avoiding crashes. Even before the tech crash his stock had dropped by 50% (he does not invest in tech, so one might have thought that he would skip the whole thing. Not so he was even early. Again in 2009 the stock drops about 50%, on a par with the S&P etc.etc., making a low in March. What is different is that the stock goes much higher, nearly twice as high in 2008 compared to 1998. Most other markets (except, for instance,Toronto), more or less double-topped at best. in a way this supports the argument that the two down-legs are NOT both part of a single structure(a flat).  From the March lows the stock retraces about 76% before hitting the parallel trend-line. This is precisely where the Dow Jones is at today’s close (roughly 12400) . Time will tell if this is it. If it is wave C down should now take the stock to about 40,000, the “normal” retracement level.

By the way, wave 5 of 5 is an extended wave, a normal occurrence in at least one of the three up-legs. The leg stretches as it were and travels a disproportionate distance (about 40,000). Without the extension the stock would have been contained inside the channel (purple).