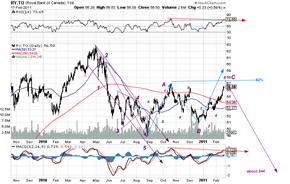 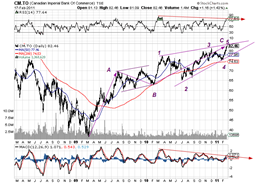 As the head of the largest Quebec based pension fund recently cynically observed, the TSE is one big China play if you take out the banks. Everything goes up 50 points a day for months on end but most of the time the banks do not partake in this feast. The RY has even earned an outright sell rating by one of the better and independent (though ironically affiliated with RY) analyst bureaus , that goes by a name that suggests it is telling the truth, albeit in Latin.

We have steadfastly maintained that the Royal Bank should trade at around $44 before it does anything else. Despite the fact that it has taken about 4 months longer than originally anticipated nothing has changed that outlook. The first leg down from the all time peak of $63 (and double-top plus a little), was a clear 5-wave move. The correction following that very quickly regained almost 62% but it was only part of a more complex correction. Now the stock is again approaching that level and even though it could go slightly further it is within a few dollars of the target. Then it should drop at least to $44

The Commerce (a longer time frame!) has followed a different path but it is equally clear. The A-B-C from the lows has a very clear (so far at least) wedge formation that is within a single dollar of the upper trend-line. Amazingly the RSI and MACD do not confirm the new highs.

By the way, the CM/RY spread trade would have worked exceptionally well!