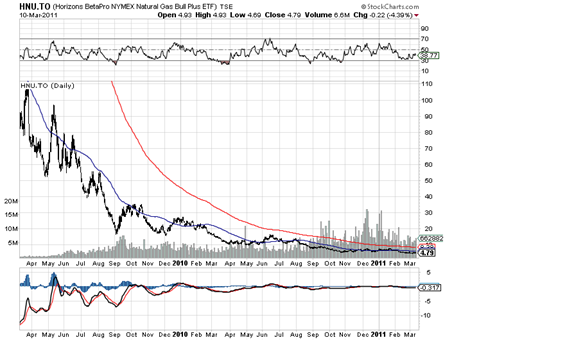 There are probable few investments that have done a better job at emptying the pockets of brokers (and their clients) than HNU.  At the time of its debut many may have understood the dangers of commodity futures mandated to roll over at specific times in a market in contango. This is where the amateurs (retail), got taken to the cleaners by their more professional brethern. But aside from that this could not be happening. Anyway you sliced it natural gas ,on a caloric or British Thermal Unit basis, was grotesquely  undervalued relative to oil, and it was greener to boot. Yes there was talk about shipping the stuff by tanker from Marocco and other such places , but the sheer costs and also the not-in-my-backyard almost guaranteed that the problem would stay local. And this is now the problem, too much of the stuff is coming from fractured shale and it cannot all be stored. Like tomatoes half an hour before the close at the farmers market, the price stays low.

As always there was an analyst at , I believe, Dain Rauscher (RBC) who actually did real research and concluded that the stuff would gravitate to $4 for years. But , as always when there is a voice from the dark we do not listen! Here is the stuff; 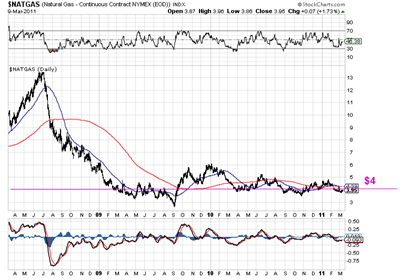 The fracturing of shale apparently causes problems that were not fully understood. Ground water is easier contaminated, earth quakes are more likely etc. etc. Our Quebec provincial government is starting to push back a little. If this catches elsewhere perhaps nat. gas will get back to higher levels when nobody owns it anymore.