Much of what goes into soap also goes into margarine, that is how the English (soap) and Dutch (margarine) decided to work together back in 1930 More recently the company was also working together with Proctor and Gamble which earned it a Euro 300+ million fine for running a cartel. It has also come into the spotlight for doing away with it’s defined benefit plan, long held out as a model. This is a big company, with a P/E at about 17 and earning a dividend of about 3.5%. The revenues are around 50 bln. a year. Employment , as with so many large companies, has been dropping steadily; 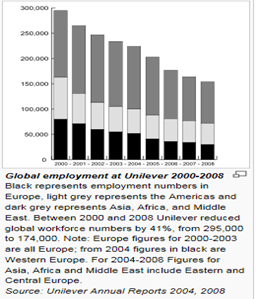 I show this simple because so many of us still believe the myth that large companies create jobs, for the most part they actually do the opposite. In any case here is the chart for UN; 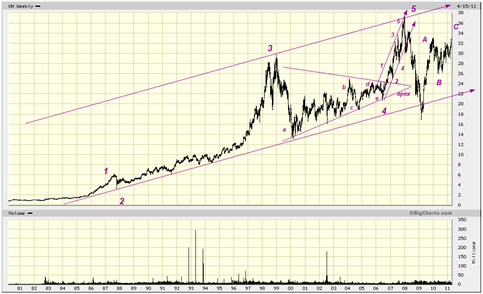 Very nice 5 waves up, and a well defined triangle in the wave 4 position (it has to be!) followed by a thrust up of the appropriate size, staying precisely within the channel boundaries. It then drops almost 62% and the question now is if that was all there is or is there more to complete the correction and make it a bit more complex?

From the lows of March 09, the move is simple too bullish to be a new bull! and there is no way to count it as one. Also the initial A-B-C or 5 wave down should be followed by at least one other such leg so our educated guess is that the stock is doing a fairly large flat (which fits better with an initial A-B-C down!). We are now in the B wave up which itself is an a-b-c. This leg needs to make a higher high, that is above $33 to complete which could happen in the next few days. It may continue to about $36 where the c leg relates to the a leg by a very common 0.618. This could all be wrong , in which case the stock would probable go to the upper trend-line which is ONLY $4 higher at about $40

This analysis jives very well with that for Colgate Palmolive (CL) , see elsewhere in this blog. On balance this is a sell in the next few weeks at somewhere between $33 and $36, you risk a few dollars on the upside but avoid the potential of losing $20+ on the downside.