Today’s Toronto Star, had an article in it by Bill Carrigan, a very well respected and independent analyst. He starts the article by recounting a conversation during which he was asked what he was trying to do (while thumbing through some charts). He responded that “he wished to know if the price of the company we are discussing is going up or down, and when it is likely to stop doing that” . After digressing a little here and there he settles on UTX, presumable as an example. Here are the charts; 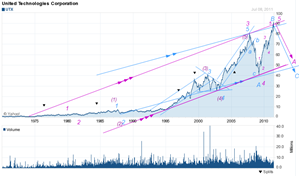 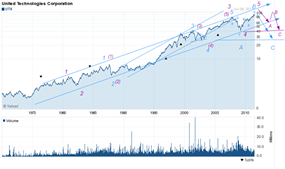 I use a 30/40 year chart rather than a 10 year one, the last 10 years having been so unique in many ways that they cannot be viewed as representative of, what one might call “normal”, for lack of a better word. Also, in this case I would use both arithmetic and semi-log scale charts. The reason for this is that the semi-log scale has a smoothing effect as all things are proportional making the Himalayas look like dunes and adding considerable credibility on whatever count one would apply. Left is arithmetic, and right semi-log! Another advantage is that the channels are narrower and clearer.

The price of this stock has been going up (to answer the first question). So much so in fact that I wonder if it was worth eight years at  the University of Amsterdam to get my masters in economics. Just buying this stock in 1972, with a lot of borrowed money, would have given the same result with much less effort.

The second question is more interesting, after all predicting the past is not that difficult. Looking at the log chart’s ( click on it to enlarge ) channel, the upper trend-line would suggest a possible price high of $110 tops. On the arithmetic chart that level has already been reached or exceeded. Before you get there you have to go through $100, that is you have to surmount  what I have called the Mnt. Everest syndrome – just $9 above the high reached so far. This stock has a beta of exactly one and 81% of the stock is held by institutions making it very likely that the stock will behave as the rest of the herd and very unlikely that it would simple slice through this level. Analyst calls are rather muted, see below;

From an EW perspective two alternative counts readily present themselves (purple and blue). At this juncture it does not matter much which one is the correct one as , at this stage a drop to $40 or to $30 (respective 4th waves of previous degree) is almost immaterial.

To sum things up, it would seem to me that if you are lucky you may gain another $19 at the outside – for a momentum player that would be just fine but would require a tight stop –, if you are not so lucky you may lose about $55. The odds are against you. 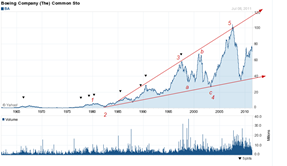 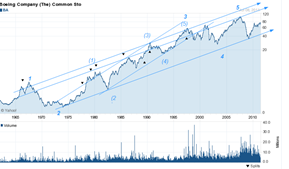 Relatively speaking, BA has more room. Still both these companies are in the Aerospace industry and much of that is defense , which , given the deficits is not likely to grow.