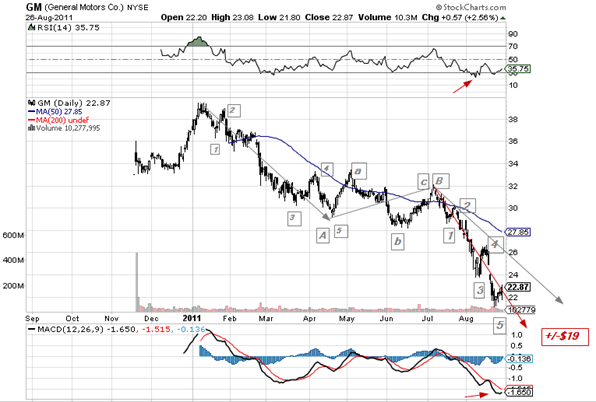 Ford looked like it might be a buy, so perhaps GM is as well.  From the euphoria of the IPO, about $40 this stock has lost nearly 50%. More importantly it did it in a recognizable Elliott wave pattern, the ubiquitous A-B-C correction or 5-3-5 move. It did it a little faster than the arrow would suggest so there is still a serious possibility that this count is not complete and that we are only in wave 4 of C which would then target about $19 as shown by the (vector equal) red arrow. This also jives better with the market as a whole. In conclusion, this is a buy sometime in the next month between $21/$19 for a bounce of about $10 perhaps. Do use a stop!

I understand the stock is already trading at less than the cash on hand, an interesting but otherwise pretty meaningless metric.