We have used the NY stock exchange from time to time as it seems to provide a better “picture” than either the Dow or the S&P. Back in April we got real vocal about the market as this is what it looked like at the time; 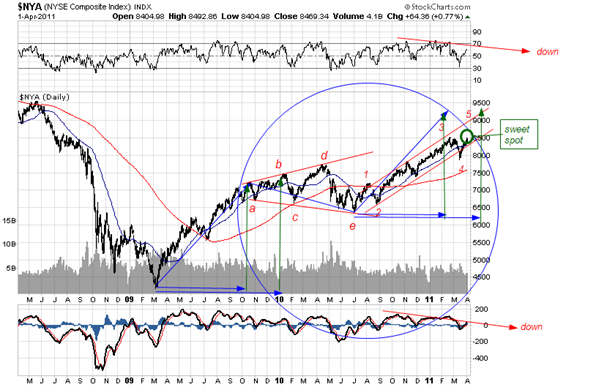 We marked the ideal target with a little green circle and “green spot”. The reason, obviously, is that the NYA appeared to be tracing out an absolutely perfect B-wave A-B-C where the A and C were going to be vector equal and the B a text-book example of an expanding triangle. Today it looks like this; 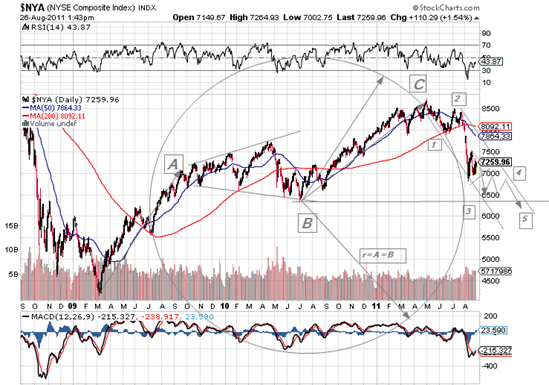 and in more detail; 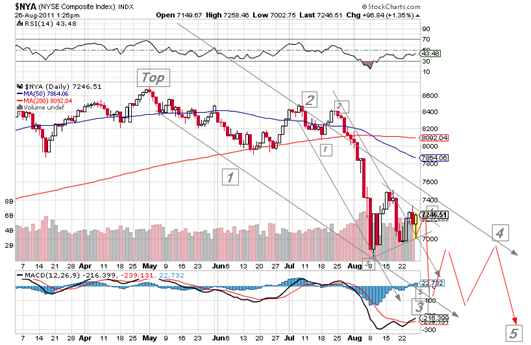 This would be essentially the same for the DOW, S&P, Russell 2000 and many others, not however for the Nasdaq that made its top in July and not April. But regardless of the detailed count it is absolutely normal for the price to retrace to the level of the B-wave on the way up, in this case 6400.

For comparison purposes I have added the TSX and the DAX below. You can click on the charts to enlarge them and move them around. Notice that there is no point in diversification, if there ever was. All three, the NYA, TSX and DAX (and many others) have all done the same thing. They more or less doubled in a nice B-wave and now they will all drop back to the level of the B in that A-B-C. (The Dax has a contracting triangle instead of an expanding one, just take the lowest point). 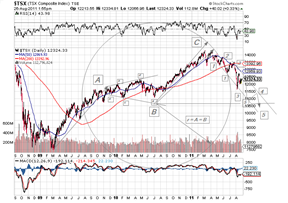 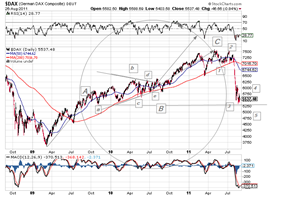 Just as the Dax was a little ahead on the way up, it is now ahead on the way down. Remember that B-waves are corrective, that is to say they are counter-trend therefore it follows that in the not too distant future we should be trading below the March 2009 lows. The drop down shown, once complete, is just wave 1 !