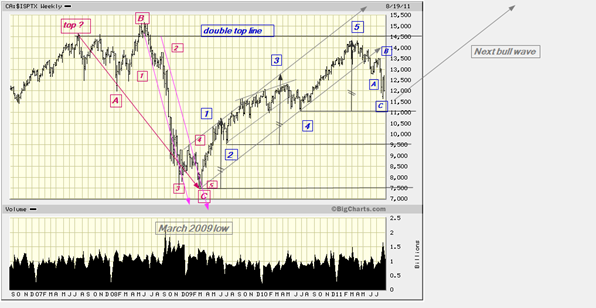 Today’s Star carried a very interesting article by one of our most respected independent technical analyst. The message conveyed is that the TSX is now primed for the next bull leg up, having completed an initial 5-wave sequence from the lows and then a three wave correction into the most recent lows. The article even quotes the “Elliott Wave Principle” , a book written by Frost and Prechter that is often considered the bible of EW.

I believe the analysis, and therefore the conclusion is incorrect. Here are a few (definitely not exhaustive! ) of the major points;

1. I have used an arithmetic chart whereas the article uses a semi-log scale chart. That however does not change the simple fact that wave 3 in the above chart is the shortest. The 3d wave in a bullish 5-wave sequence is never the shortest.!

2. Given the absolutely clear overlaps within wave 3, it can only be a contracting diagonal, a.k.a. a pennant, rising flag or wedge. These occur only in 5th wave or c-wave positions, neither of which apply here!

3. Waves 2 and 4 appear to have the same internal structure, both being zig-zags. This violates the guideline of alternation. Though not impossible it does raise questions with regard to the credibility of the count.

4. Though the article is not clear on the big picture, it does more or less imply that we are in a “new” bull era, which presumable means that the wave up from the lows is a wave 1 of some degree. The recent correction (A-B-C) is then wave 2. Roughly speaking this correction has taken back 3000 points out of 7000 points up, close to a Fibo 38%. The problem is that waves 2 more often than not take back 62%, 76% or even more. Though not impossible it does make one wonder.

5. Moreover,corrective waves usually reach the level of the previous degree wave 4, presently we are at least 800 or so points away from that.

6. C waves are always 5-wave affaires. The one shown in the Star definitely is not.

7. In big picture terms the rally from the lows of March 2009 is steeper than the rallies from 1987 to 2001 and 2003 to 2008. This kind of paradoxical and counter-intuitive behavior is typical of corrective/ counter-trend waves, not bull waves.

8. In a world where all markets seem to be doing the same thing, more or less at the same time , it is hard to find any index of substance that would lead to the same conclusion.

9. Waves, single ones or a sequence, have a tendency to trade within , often very precise , channels. This is not EW per se , but a more general, technical, attribute of market behavior . The absence of a channel for a 5-wave sequence casts a lot of doubt on such an interpretation. In contrast the clear break in the middle and then the resumption of the trend does, very much, support the view that this is an A-B-C.

The more accurate count , in my opinion , is shown below; 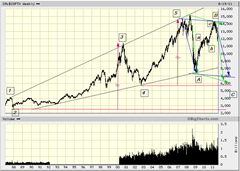 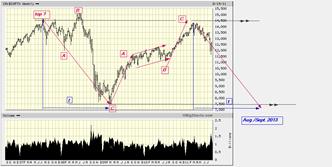 In the big picture, on the left, I think the “orthodox”top in Canada was in ‘08, and not ‘09. 5-waves down is indicative of a zig-zag, they never stand alone, so the huge retracement would simple not have happened. Assuming that the bear started in ‘08 gives a initial A-B-C (irregular) wave down, typical of a “flat”, which by definition is flat implying that the B-wave should almost double top. Exactly what we have! Next the C wave which should take us to the 4th wave of previous degree (below March 09 lows) and should, if it does it symmetrically, make a low around Aug/Sept 2013. The B wave was a 3-wave affaire, as can be seen in at least two dozen individual stocks and very clearly, for instance, in the RBC focus list fund (see elsewhere in this blog under focus list).

Using EW is much more an art than a science, as much is in the eye of the beholder. But there are nevertheless many rules and guidelines that are there to be adhered to, not because they were postulated as some sort of theory but simple because this is what had been observed a few thousand times.

There is one caveat that I am aware of that could disrupt this view, and that is if we are developing a huge triangle. Flats and triangles are essentially the same sort of sideways structure. Initially one cannot be distinguished from the other. The C wave would be shorter but still takes out about 62% of the preceding leg, in this case about 4300 points from the spring highs. Action in the Milan index (and others) strongly suggest this is not going to happen.

As always, time will tell.