The top chart is of the S&P, the one below of the Frankfurt DAX and below that the FTSE Athens top 20. During the fall the S&P lost exactly 50% of its value. The DAX lost 69% and the Athens top 20, 76% Not precisely the same but in the same order of magnitude. Interestingly every single wiggle occurs in all three charts. This relationship holds for the first half of the rebound, then Athens goes its own way. Is it perhaps telling us something??

The SPX and the DAX continue listening to the same drummer except that the DAX is more robust. So far it easily exceeded the B-wave point on the way down, whereas the SPX has failed to make that high.  Concerning the structure, both are undoubtedly working their way up in an A-B-C correction, that is a counter-trend move. In terms of symmetry, both could still forge their way up to the green circle; Athens is obviously complete and perfectly symmetrical. The SPX still has the time and could have one more spurt, perhaps as a thrust from a triangle. That is less likely with the DAX, which has decidedly broken a trend-line and there is no time left and there is no (finished) triangle. Also it would have to regain all the losses which i consider a fairly tall order. ( By the way, the difference in the red and green circles reflects how the individual A and C legs , and the “pause”in the middle are counted ).

Athens is a clear train wreck, and both the SPX and the DAX have outperformed to some degree. Many other markets have been far less robust. Normally one would expect a retracement in the order of 50/62%. The STOXX 50 may represent what is normal best. Here is it’s chart.

The yellow area represents the 50 to 62% range. Here too the circle is drawn with a view towards symmetry for the entire corrective structure, it does not show all points where C=A. Here the high occurred 5 months ago in March, which , by the way, was anticipated! 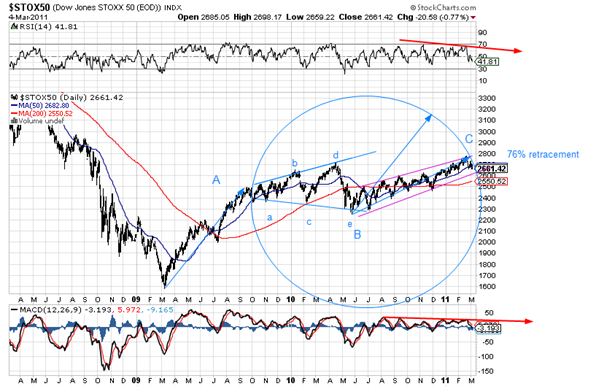 The 76% retracement is wrongly calculated due to the fact that the chart did not show the top near 4000. The blog can be referenced by going to the March 5th entry, or searching STOXX50.