R.Prechter has now for the longest time argued that we are going into a “deflationary depression”. In his latest “Theory”, a misnomer for his monthly publications, he uses a chart from the St. Louis Federal Reserve Bank , a public database known as FRED which I will also use but in a slightly different way.

MV=PT is the mathematical brainchild of Irving Fisher. He used the formula to explain the debt deflation that he thought was the cause of the Great Depression. Later, of course it was extensively used to provide the monetarist theories of the likes of Milton Friedman et al. with a mathematical framework.

The M stands for money / bank reserves. V is velocity , turnover or by extension the multiplier if you wish. P is the price level and and T is the volume of transactions , trade, or GDP. We will not get into the detailed definitions as that is beyond the scope of this didactic exercise.

Friedman and all monetarist, of course , believe that all inflation is monetary, always the result of too much money chasing too few goods. This is why everybody and their brother are now absolutely certain that the few trillion or so that the Fed and other Central Bankers have thrown into the pot, is certain to cause runaway inflation. This consensus exists despite evidence to the contrary, just a years ago the FED was fearful of deflation, and appeared so scared that it prompted QE2. The thing that the FED does not want to acknowledge, certainly not through “helicopter Ben”, is that there is such a thing as a “liquidity trap” best explained by the vernacular term “pushing on a string”.

Here is how it works . You load up the system with cash which flows to the banks (except for what they deposit back to the Fed) who then lend the money out which multiplies like rabbits depending on what fraction is used in the fractional reserve system ( presently 0 so the multiplier could theoretically approach an infinite value) Here is the M and the V (multiplier); 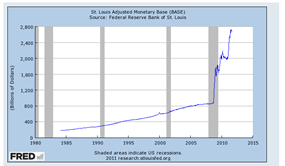 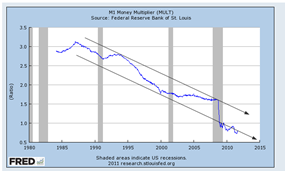 Both courtesy the Fed. They can be enlarged by clicking on them. Since about 2008 the monetary base has gone from 900 to 2800 or roughly threefold. The multiplier has gone from 1700 to 700 or roughly 2.4 times in the opposite direction. If further adjustments are made for banks deposits at the FED that sort of bypass this process the growth in reserves is , for the most part negated by the implosion of the velocity, as we know that GDP  (the T) has not grown much over past few years. The result is that inflation , the CPI, (the P)has not budged; 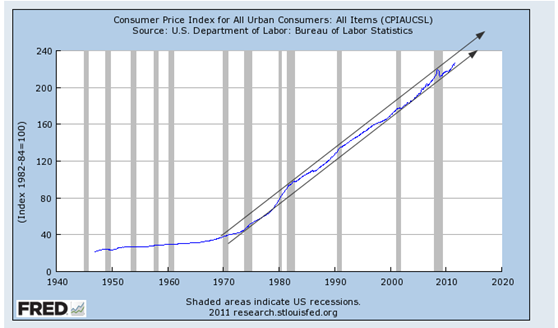 It keeps going up for 40 years now at a rate of 3% or so (my guess) but has not accelerated recently. Even gold, as Prechter has pointed out many times, has over compensated for this inflation at least when measured from the $36 or so at the time Nixon (1971) did away entirely with convertibility. On the other hand. measured from the highs in 1980 it may be undervalued, so you get to pick your poison depending on what camp you want to be in.

As the latest (Sept 5) copy of Bloomberg/Business week points out, tongue in cheek, a better hedge might be stock in Sturm Ruger. These guys have done very well according to this publication, especially in the “concealable handgun” segment. The implication is that you do not need to own gold or food if you have the means to take it away from your neighbor. Perhaps the next economist has to figure out how the F for force fits into the formula. 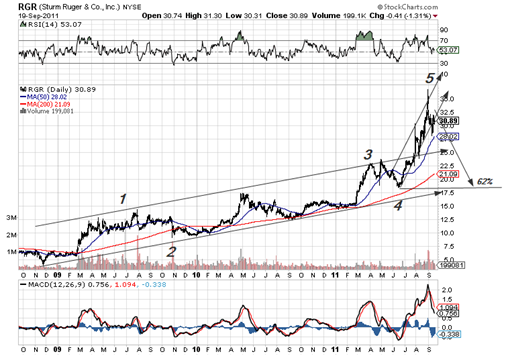