This is North America’s Railway, with 32000 km of track it covers the continent from north to south and east to west. Interestingly, CNR was created as a Crown Corporation in 1918 when the then bankrupt Canadian Northern Railway, together with a few others, were consolidated and bailed out by the Government (sound familiar?). It was privatized again in 1995. It has in the meantime made numerous acquisitions in the US consolidating its position as the dominating transportation (it does trucking, warehousing etc.) company around the Great Lakes. It is headquartered in Montreal. Here is the chart from January of this year;

The idea then was that the stock had essentially reached its limit. We were wrong; 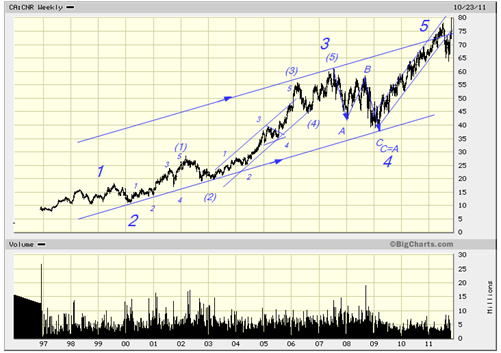 The stock did not stop at the trend-line and or the Fibo relationship suggested in the previous blog.  Instead it decided to do a “throw-over”, an intrinsically unpredictable event, and add another $6 or so. Then it briefly cratered only to rise again and make new highs. Notice, however, that the count from half a year or more ago and today is not changed at all. This is one of the clearest 5-wave sequences I have ever seen. There may be some questions about the minute details of the start , but the big picture is perfectly clear! Sometime in the not too distant future this stock will trade at $40. 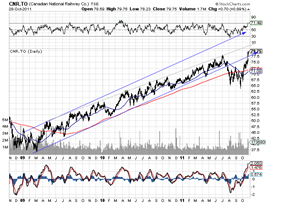 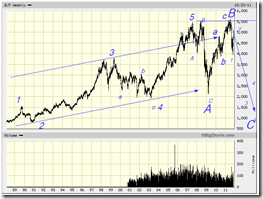 From the detailed chart it is evident that the stock cannot reach the upper trend line for quite some time now. Also it is completely out of phase with the likes of CP (see last weeks blog). The chart looks like that of a momentum stock which basically means that people keep buying in the assumption that a greater fool will show up. That stops when it stops. Also, I suspect that the success of this stock is nothing more than the result of a China play, almost exclusively driven by commodities (see FFH’s Prem Watsa’s views on that matter).

Looking at the Dow Jones Transport index, historically known as the “rails”, we do not see this exuberance. If we project that performance on CNR the stock should be trading at around $55, about $25 lower than it is. Even accounting for CNR’s “first class” status, that is a big difference. What is more worrisome is that the DJT index has “triple-topped”, and the last leg up is best viewed as a B-wave and not a 5th wave. This does not bode well at all for that index and for CNR, which in the main, despite it’s premium, still correlates relatively well with the DJT. Time will tell, but if you want the answer, you have to ask the question.