Extrapolating the above, that is applying the same logic,it would seem that the Royal has not yet completed its first leg down; 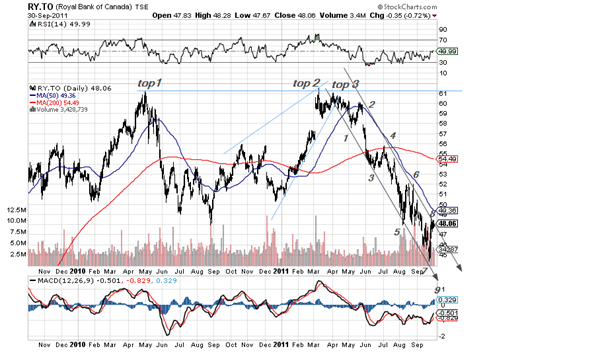 The problems with this one have been discussed in some 5/10 different blogs before. First and foremost there are three tops that are within a fraction of each other. If you use the US$ denominated chart the highest one is  clearly the second one the second one. That leaves questions for what happened from Sept. 2010 to Mar. 2011. That would have to be a wedge that would strongly suggest that the 5th wave, already miniscule, failed and that the real top should be top3. The very clear channel that follows seems to agree with that interpretation. This , of course, rhymes best with the preponderance of the evidence above, in the previous blog.

Assume, for the sake of the argument that this is correct, then there are now a total of 8 individually recognizable legs within the channel. 8 is not a logical number , it has to be 9 in order to make a 5 wave move! If that happens it should again be a buy, for a larger trade.