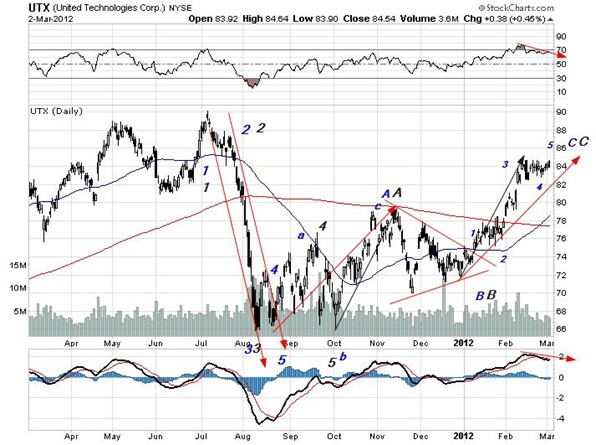 Back in July, early August last year we were convinced that this one had only one way to go and that is what it did, right to an initial target of about $65. This stock hit the lows at about the same time as most stocks. What is by no means clear is how one would get to 5-waves down for wave 1. I suspect the 5th wave of wave one was a failure and either occurred immediately after the low (blue) or in October (black).That was good for a loss of around 30%.

What I certainly did not expect is that the stock would recoup 75% of that loss and that it would take such a long time. Perhaps this is what 15 trillion in bank reserves and other stimulus  does? In any case today, looking at this rebound, it is quite obviously an a-b-c and a fairly precise one at that. The b is probable a triangle and the up-legs, a and c are either as shown in black or in red. Variations are possible but the main message here is that, for the moment at least, this is a correction and therefore the downward trend should resume any moment. This is a sell as the target remains as before (see previous blogs).