When you open the flood gates it is impossible to know where the water will flow, other than that it is always downhill. Our CB has the difficult task of balancing the macroeconomic needs of Canada (such as avoiding the “Dutch” disease), with the micro needs of certain segments of the market, specifically housing. Just as a liar needs an exceptionally good memory, distorting the market requires ever increasing regulations and meddling. The CB cannot do all of that so the Dept. of Finance is recruited to do the minute fine tuning. Today , for the 4th time, the rules of the mortgage market were changed such that “prophylactic” beneficial effects will reduce the risk of the non-existent housing bubble from imploding. Among other things, the 25-year amortization period is back and no more than 39% of (gross?) income may be spent on housing ( if that includes insurance and real estate taxes is not entirely clear). 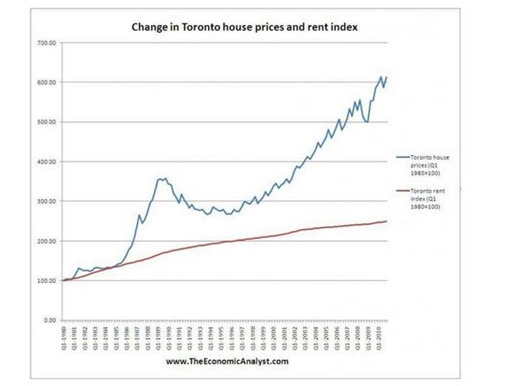 Clearly there is nothing to worry about. It gets better when we look at an OECD report done in 2008 and dated to 2007; 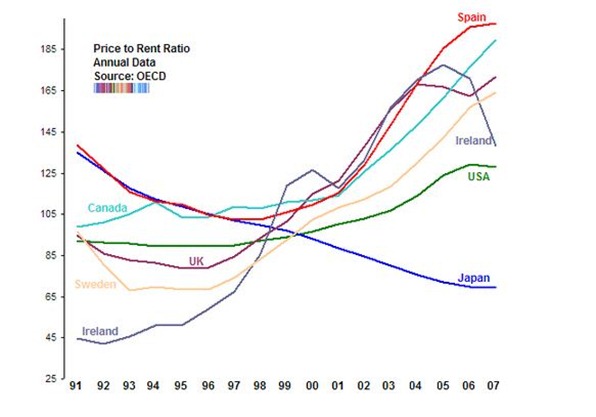 Japan, started its descend in 1989, roughly when this chart started. That ratio has dropped by half and home prices by about 80%. The US is not even close when it peaked in 2006. The only other countries on this chart that went up in tandem are the UK, Ireland and Spain. Ireland has already imploded and Spain is in the process of doing so. The UK started to go up again, why is not entirely clear but it may be the foreign component that thinks nothing of buying mews in Mayfair at 5 mln. pounds a shot in order to have a pied a terre , something that is probable very significant in Toronto as well. It would seem that Canada is following the Maestro, he too could not see a bubble. The irony is , of course, that it is this very same government that first introduced 40 year maturities etc. etc. and has now brought them back to 25 years. First they help create the bubble and then they have a hand in its collapse.