Yesterday’s comments from the Fed were anything but reassuring. Anyone watching the Q&A session would be hard pressed not to get the impression that Bernanke is a little unsure of himself. GDP was expected to grow less than before, inflation was expected to be lower than before and is once again dangerously close to deflationary levels, and job growth was essentially expected to be marginal at best. So the response is a little more “twist” about $267 bln. worth of it. This does not add any reserves, all it does is flatten the yield curve, which is already pretty flat considering that the 10-year at about 1.65% is roughly 1% more expensive than the 30-year.

Interestingly, when asked about the “liquidity trap” (a condition that in the vernacular of economics is better known as “pushing on a string”) by a Japanese reporter referencing his home country’s experiences, Bernanke took exceptional pains not to repeat that characterisation in his response. One cannot expect the chairman of the Fed. to concede that that is where we in fact are! Leading a horse to water is one thing, making it drink is an entirely different story.

Accommodative policies can take the form of monetary stimulus, fiscal stimulus, or in other areas by , for instance waging a war that is inevitable running a deficit. The US and now also the ECB, Japan, China, Brazil and basically every country in the world are being accommodative to excess. Here are a few, randomly chosen, charts; 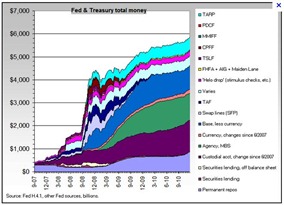 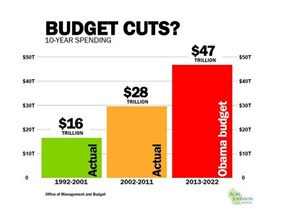 US meddling in the supposedly free capitalist markets by the Fed and the Treasury dept. went from about $400 bln in 2007 to $6 trillion now. At the same time government spending almost doubled, or is expected to double despite the alarming fact that the US spends $1.40 for each $1 it collects. This is a worldwide phenomenon; 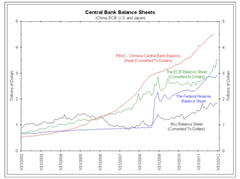 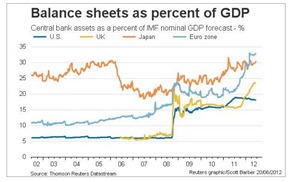 The one on the right is updated to today, more or less. For the first time the ECB has surpassed Japan which country has been at this now for more than 22 years. Collectively central banks have now thrown more money at the problem than the GDP of the US for a whole year. Something will need to change and in due time it will. If it is the psychology or mood of the market that we are concerned about, perhaps higher interest rates would give a little more confidence.