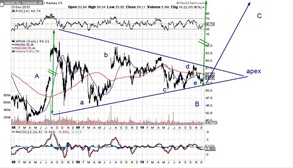 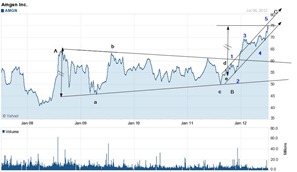 At the time we pointed out that we preferred the upside resolution of this triangle, but if wrong the stock could go down equally fast. This triangle is a B-wave triangle in a wave 2 correction. The target indicated by the arrow is a little above $80. We have changed the internals of the triangle by lengthening the c wave as otherwise the e wave would drop below the c which is impossible. This also had the effect of delaying the thrust up by a week or two. Otherwise it is pretty well as predicted. The high of $75.17 is close enough, certainly now that the thrust itself appears to have the necessary 5-waves. This is how it all fits the big chart; 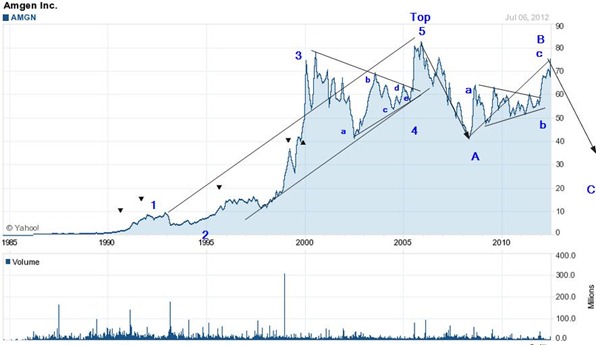 This is an instructive chart, as we have a triangle in the 4th wave position followed by one in the B-wave position. Notice that the patterns overall are very similar. For those that are interested in such minutia, we point out that the first triangle could just as easily be a 4th wave correction followed by a “wedge” that has a very small 5th wave. Also the A wave down can be viewed as either a 5 –wave affaire or an a-b-c. The first would suggest a zig-zag and the second a flat. We are already close to double topping so a flat looks better. The end result should be an A-B-C correction in which, and this is quite common, all three legs are approximately equal as vectors. The target is about $35/$28. A 61.8% loss of the entire value from the top is around $31, about the middle of that range. Sell if you own it.