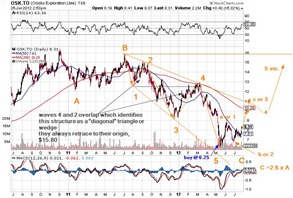 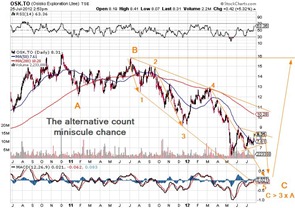 Here is another update on Osisko. Originally we suggested buying this at $6.25. Then we identified the drop from $9 to $7, which erased most of the gains as a b-wave. We do that in order to start off with a minimum expectation. Now our take on this is that it was a wave 2 implying that we are presently in a wave 3 to the upside.

Given that we had had overlap between waves 4 and 2, this has to be a “diagonal” triangle. A misnomer if there ever was one, read expanding/contracting wedge. They occur only as 5th, as an ending diagonal, or C waves. Given that this is definitely not a 5th it has to be a C, implying that there must be an A and B in front of it which is indeed the case. As these patterns occur when things have gone too far and too fast, the almost always retrace the entire move. The risk then is that the diagonal is not yet complete, shown as an alternative. The problem with that count is that the proportions become ridiculous so the chances of that being correct are miniscule. That is also the case with other possible alternatives. So stay with it but use a stop just under $7, just in case.