Cnooc agrees to buy Nexen for $15.1 bln. This is China’s largest offshore oil and gas explorer. Works out to $27.50 per share, a premium of 61% over the July 20 price of the stock. Here are the charts; 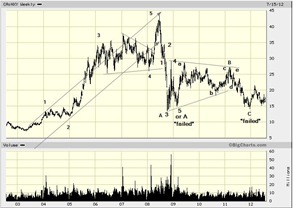 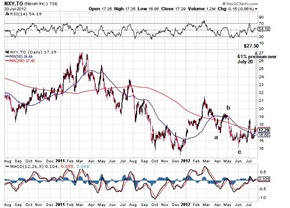 It is always easy to predict the past but equally useless. It does , however, serve a purpose to see if the application of EW might have shed some light before what happened. Looking at the big chart there are two triangles, one in wave 4 just before the top and one in wave B of an A-B-C correction. The B-wave triangle could be larger or smaller depending on where you start it. The subsequent “thrust” down , like the 5th wave of the 2008/9 debacle, is a “failure” in a sense that it did not result in a new low. Failures do not occur often and here there are potentially two, both suggest a stronger market beneath the surface. Usually stocks return to the highest level in the triangle, the top of wave a, which is exactly what has happened.

Looking at the short-term chart it is obviously next to impossible to count the waves in the “thrust” down, however what is fairly clear is that the last a-b-c points to an overall trend that is now up. Taking all three, the triangle, the failure(s) and the a-b-c at least the outcome is consistent with EW. The 61% premium is the icing on the cake.