Back in Febr. of 2011, a little more than a year ago, we made the point that this ETF would go down and that en passant, this had a predictive value in terms of oil prices, considering that Russia is the largest producer (see the blog). A little reverse engineering if you wish. The ETF was at about 40 at the time. Here we are today; 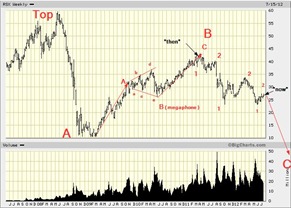 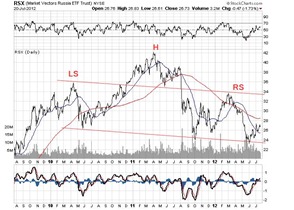 Only down about 40%, roughly, but a lot more to come. For those not completely infatuated with the EW methodology I have thrown in the more traditional Head & Shoulders analysis . Both call for far lower levels even if the count itself is definitely questionable. The B-wave is not, so < $10 is virtually a given.

Oil is perhaps not the only factor in this decline. Economics has always maintained that concentration of wealth (or initially inequality of incomes) leads to a situation where overall demand falls short of what is required to keep the economy going. A form of under-consumption, if you will, induced by the lower propensity to spend (relatively, of course ) by the wealthy. Economics is little more than a list of equations that are, for the most part tautologies; they are true by definition and therefore prove nothing. Ruchir Sharma recently wrote “Breakout Nations; In Pursuit of the Next Economic Miracles”, in which he sheds some new light on this old concept, explaining why China is a better bet than Russia. Here are some figures to mull over (from the Star);

In both cases most of the riches were obtained in the usual manner but that is a moral issue. In pure economic terms Russia has a big problem, which might only be resolved the way it was back in 1917. In varying degrees this applies to the world at large, the US included.