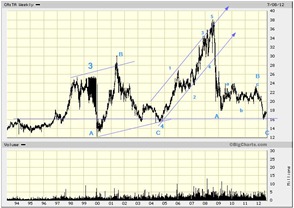 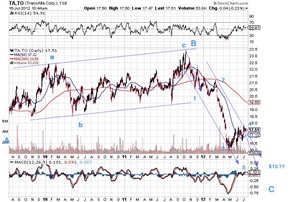 TransAlta Corp is a utility, the largest publically owned in Canada. It operates here but also in the US. It does a little bit of every thing, coal, wind , oil, hydro, solar and geothermal. It has been around for more than 100 years. Sustainability is a primary concern. 3 days ago they announced their dividend for the most recent quarter, $0.29. or $1.16 a year (without compounding). With a share price of about $17.50 this works out to 6.3% (when properly compounded about 6.5%). The p/e is around 22, a little high.

The stock is doing a large A-B-C down from the $38 high. It has already dropped 58%. 62% would take it to $14.50. It has already dropped to the level of the 4th of previous degree even if the range for that extends to about $13.50. The C-leg is small relative to the A-leg and certainly appears to be missing its 5th wave, which could take the stock to about $ 15 if 1 and 5 were to become equal. If the C leg grew to 62% of the A leg the low would occur at about $12. Just a few weeks ago, it was trading at the same level it was trading at 18 years ago!To make a long story short, in the worst case the stock could fall another 30%(but would presumable rebound within a short period of time, say 2 years at the most). lets assume your time horizon is somewhere between 5 to 10 years. Your risk-free return would equate to the yield of Government of Canada Bond with that maturity, shown below; 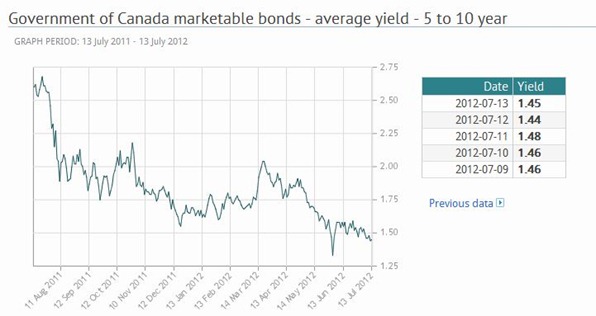 The actual 10 year is at 1.6%. If you were to own the stock in a taxable account you would be able to gross-up the 6.5% yield by 1.4(assuming you are enjoying the highest marginal tax rate) to 9.1%, for a difference of 9.1 – 1.5 = 7.6%. This could be considered the risk premium that you are willing to forego financing Ottawa. For non–taxable accounts the difference is still a respectable 5%. At that rate money doubles in 14.4 years so a brief paper loss for perhaps a year or two of 30% is not that relevant.

Then there is ZUT, the BMO equal-weight utility index. It is fairly new. Here are the charts; 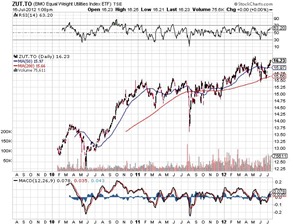 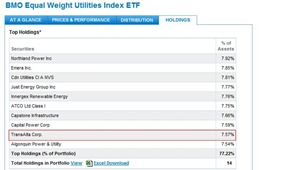 Notice that the ZUT kept going up while the market in general was going down. Over the past two years or so it is up about 30%. It resembles the inverse of the bonds. TransAlta has gone down about 20% over the same period. It is a component of the ZUT so its relative performance is a little worse than those numbers suggest. Barring any fundamental reasons that I am not aware of, this should be a buy.