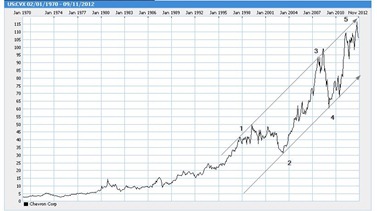 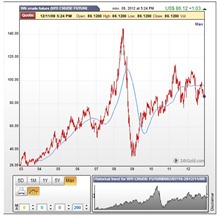 Chevron is one of the “six sister” that comprised Rockefeller’s Standard Oil Co. broken up in 1911 by the Sherman Antitrust Act. It is now one of the largest integrated oil companies in the world.  On the face of it, one would expect that there would be a positive correlation between the price of oil and this stock. For the last 4 years or so , that is not the case. Oil peaked in 2008 and the stock this year (that remains to be seen but we certainly think so). Chevron is pretty well alone in doing so. Other large integrated companies like Exxon, Royal Dutch , British Petroleum and also the service industries like Halliburton, Trans Ocean and so on , are nowhere near their highs. The precise count is , unfortunately, not entirely clear. Back in June when this stock had peaked at about $110 it looked like a sell (see that blog), but by some miracle the stock went on to about $118.58 , see chart below; 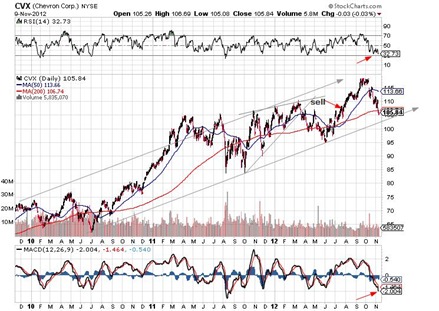 It is presently already below those levels and is trading at levels first reached in April of 2011, more than a year and a half ago. Given the very distinct B-wave rebound in oil the outlook for the stuff itself is very poor consequently one would expect Chevron, and with it most other oil companies to drop in the years ahead. Definitely a sell with a first target around $60.

By the way, the stock that is best correlated to oil is IMO, see below; 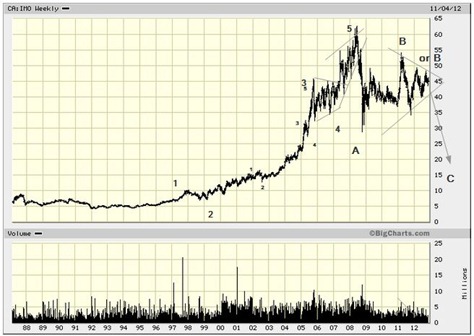 Ask yourself what “regression to the mean” would do to this stock.