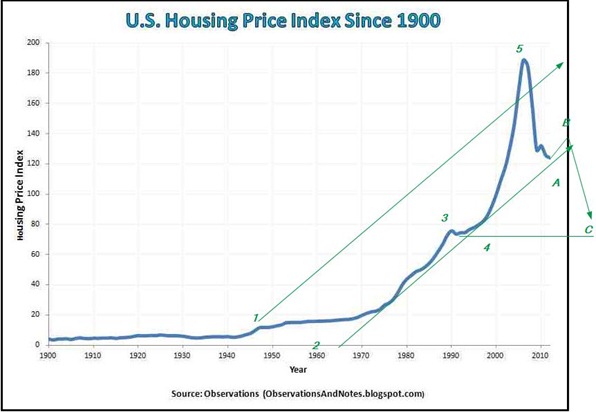 No Canadian long term charts that I could find, but presumable we did pretty much what they did in the US. We do know that in 1912 (the year of the Titanic) a house in the Annex (a suburb of Toronto) cost $6900. That same house today would easily fetch about $800,000. That is roughly the same as in the US chart, roughly 100x. The TSX went from 500 to 16000 or 32x. Not a fair comparison to be sure. A house costs money to own and stocks for the most part pay dividends. Of course in the US owning a house can earn you a substantial tax deduction, not in Canada. But then any capital gains in Canada are tax free, at least on the principal residence. Not so in the States, but then the “deductibles” are so high that nobody pays anyway.

In the period from 1974 to 1978 you could have bought a very nice house in Toronto for about $100,000 when the TSX was at 1000. That house is worth about $1.2 mln. today and the TSX 14000.  Roughly 12x against 14x. One dividend paying and the other tax-free. Very scientifically speaking, that is the same and it should be. Both are real assets and should have tripled simple on account of lower interest rates. And tripled again on account of inflation that our governments insist does not exist. That more or less explains it all. Should stocks go down as a result of higher interest rates and/or lower inflation (deflation) the real estate values will follow in tandem and, no doubt, catch everyone by surprise. In Japan they already know what can happen; 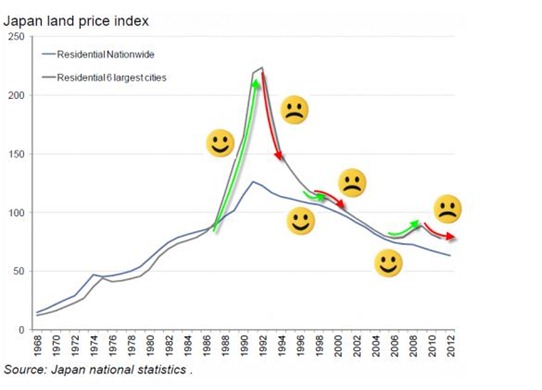 From peak to trough (?) they are down 70+ % in the big cities where the majority lives.