Back on Jan 7 we confidently predicted this stock would not trade above $195. Of course it did, reaching about $210 or so. Nevertheless the charts were pretty clear and now, almost a full year later the stock is still at $190. Here are the charts; 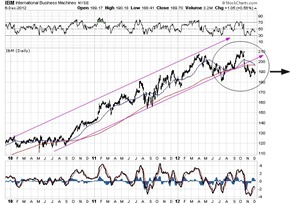 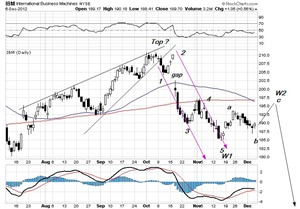 To get a better view of the big picture look at the previous blog. From the chart on the left it is clear that this 5th wave, coming from $80 in late 2008, has broken out of a channel that has worked well for the past 3 years. From the detailed chart it is furthermore clear that the top was reached by way of a wedge and that the initial leg down was a 5-wave move. From this one can conclude with near certainty that , at the very least, a second leg down should develop in the near future, targeting roughly $175. However, it is far more probable that this is the start of a more serious bear market for IBM that has the potential to cut the stock by half , or more. Once again we would be sellers, perhaps after the bounce. More detail below; 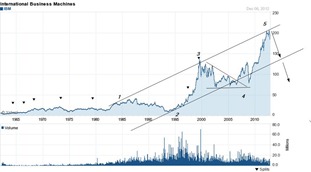 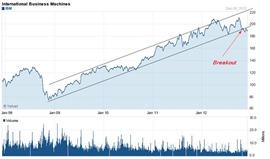 The wave count shown on the 40 year chart is probable wrong as the 5th wave probable started in late 2008, after the “thrust” from the triangle had returned to the apex,  but this shows better.